A celebration of the ACFS SA 50th Anniversary 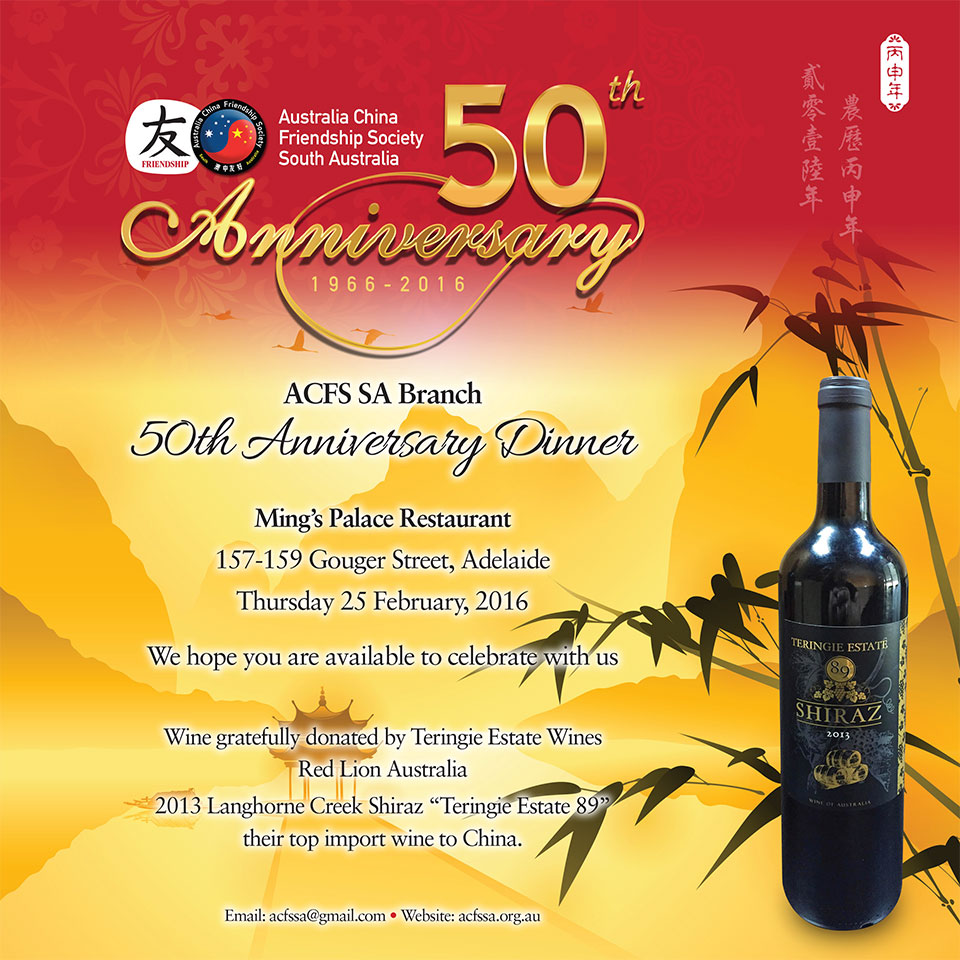 We thank Ming for his generous support of our celebration

Ming’s Palace Menu for the night

The Australia China Friendship Society South Australia (ACFS SA) is celebrating its 50th Anniversary of friendship and cultural understanding with China this year, the Year of the Monkey.

This is a significant milestone in South Australia’s history as the establishment of the ACFS SA in 1966 forged the way for the South Australian Government in 1986, when then Premier, Hon Dean Brown was able to establish a relationship with our sister-city Shandong.

“The ACFS had its beginnings in an era when these things seemed almost beyond reach, and when the pioneers of later developments were often ostracised or harassed for their beliefs” Ms June Phillips, President of the ACFS SA said.

Ms Phillips continues, “When the Australia China Society branch was formed in Melbourne in 1951, its aim was to extend and strengthen cultural, trade and peaceful relations with China and to seek Australia’s diplomatic recognition of the government of the People’s Republic of China.”

“China has changed much over the past 50 years and our early members particularly remember the tours where Westerners had a rare and precious insight into China’s traditional society and communities.

“Since those days the ACFS SA has gone on to make a major difference in the way South Australians and Chinese are able to enjoy each other’s cultures, diversity and understanding.

“More than 250,000 English books were sent to China from South Australia between 1979 and 1983 from the docks of Port Adelaide in tea chests on Chinese grain ships.”

The ACFS has continually promoted unique and specialised tours to China and supported language classes along with a myriad of special projects including supporting youth, flood victims in China and working with the Zouping School for Deaf Mutes amongst others.

“Tony Pasin MP has been a long supporter of our promotions of the annual Shanghai International Youth Camp where students from Australia connect with over 200 students from all over the world, ” Ms Phillips said. “The camp’s aim is to build friendships and cultural exchange of young people and cooperation.”

A celebratory dinner is being held a Ming’s Palace Restaurant to mark the very significant milestone with The Honourable Hieu Van Le AO, Governor of South Australia and Mrs Le attending along with The Honourable Jing Lee MLC, Mr Hongwei Rao, Consulate-General of the People’s Republic of China, Dr Ross Gwyther, National President Australia – China Friendship Society Inc and Her Worship the Mayor of the District Council of Mount Barker Ms Ann Ferguson OAM amongst others.

As the ACFS SA continues to extend their very long held and valued relationships within China the development of their new website aims to promote South Australia’s and China’s strengths with a focus on tourism, industry, agriculture, trade and education that will continue to grow for many years to come.