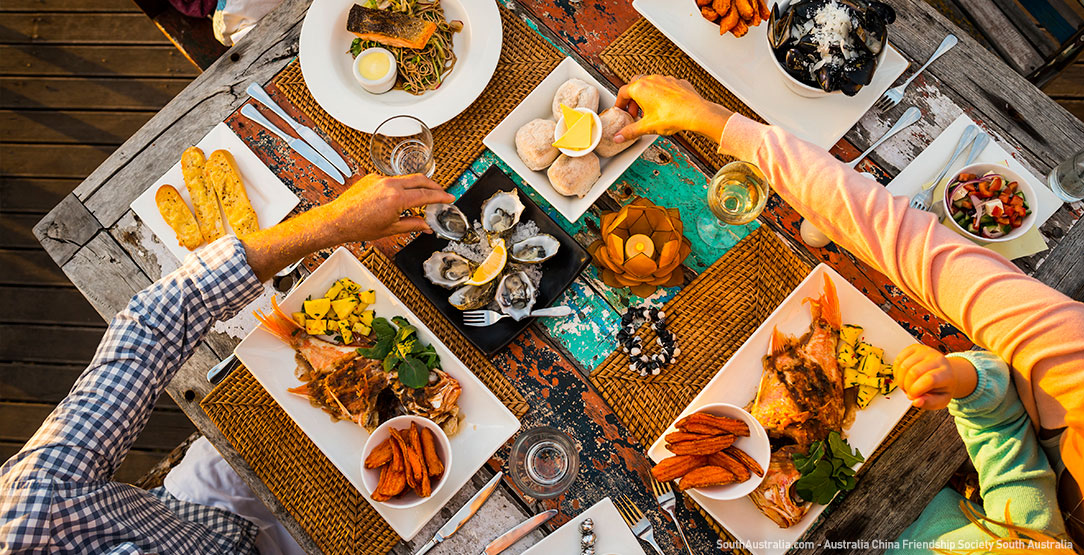 South Australia’s wine industry is internationally renowned for producing premium wines, with the state exporting to more than 100 countries. South Australia has an estimated 76,000 hectares under vine, with the state boasting some of the oldest vines in the world. It is also one of the few places in the world that is free of the vine destroying pest phylloxera, which is the key reason why the state is home to such old vines. The state’s clean water, air and soil, combined with optimal climate and innovative winemaking has seen South Australia’s vineyards thrive. The clean environment ensures these areas produce world-class wines, in a range of varieties.

In 2013–14, the industry produced more than 700,000 tonnes of grapes valued at $425 million. More than half of Australia’s great wines, as classified by Langton’s, Australia’s leading fine wine auction site, come from South Australia – with popular labels including Jacob’s Creek, Wolf Blass, Yalumba and Penfolds.

Adelaide in South Australia is the nation’s wine capital and commands the dominant share of national grape and wine production. Home to the major wine corporations’ production bases, South Australia has over 3,400 grape growers and 720 wineries.

South Australia produces around 80% of Australia’s premium wines. From the wine regions of Barossa Valley, McLaren Vale, Langhorne Creek and Adelaide Hills, through to the Clare Valley, Coonawarra and the Riverland, South Australian wine is recognised for its superior quality and taste, which is competitively priced.

South Australia produces a higher proportion of flagship and premium wine than the other Australian states, and the national wine industry organisations, major wine education and research and development institutions all have their headquarters here, providing leadership in winemaking and viticulture intellect and expertise. This long history of excellence in grape and wine research is delivering a competitive advantage. Further investment to attract talented and skilled people to South Australia’s wine industry is vital to ensure tomorrow’s researchers and industry leaders continue to emerge.

Managing biosecurity threats is a major priority, with expertise and leadership from the Phylloxera and Grape Industry Board of South Australia a key part of protecting the industry for future generations. South Australia is well placed to capitalise on the demand for premium wine that is produced in a clean and sustainable environment by better promoting these unique qualities to new markets and consumers.

South Australia is a major producer of premium horticulture and recognised for its excellence in environmentally clean, safe and advanced agricultural production.

Fruit, nuts and vegetables make up South Australia’s horticulture industry, growing more than one million tonnes of product per year and generating $850 million in revenue for the state’s economy.

Potatoes, citrus and almonds are the largest of a vast range of fruit and vegetable crops produced in South Australia. South Australia is the largest producer of potatoes in Australia while citrus fruit has one of the largest volumes of exported horticultural produce with approximately 50,000 tonnes exported each year. The state’s ‘fruit-fly free’ status is a key selling point to overseas export markets. Almonds are South Australia’s largest horticulture export and has benefited from significant investment, from major tree plantings and high global demand, through to higher prices. The State’s horticulture industry has prioritised high density orchard plantings in apples, citrus, almonds and stone fruit as an opportunity for increasing yields.

The horticulture industry and the South Australian Government is investing in high-tech, sustainable horticulture technology, especially for tomatoes and capsicums. These innovations include the construction of the southern hemisphere’s largest climate controlled glasshouse, as well as a seawater and solar fed greenhouse facility. These initiatives will help to ensure high value greenhouse crops can be grown year-round with further opportunities available to develop sustainable horticulture. South Australia’s fruit and vegetable producers are also continually planting new varieties to meet changing consumer preferences.

The Riverland and Mallee are warm, dry regions with sandy soils. Surface and underground water resources support production of citrus, stonefruit, almonds, olives, onions and potatoes. The Adelaide Plains is the primary vegetable production area, with in field production of vegetables and over 700ha of greenhouses producing tomatoes, capsicum (bell peppers) and cucumbers.

The South Australian dairy industry produces over 500 million litres of milk annually from its 85,000 cows, bringing approximately $860 million to state revenue. Food safety and quality programmes are overseen by the Dairy Authority of South Australia, a statutory body acting at both farm and processing plant levels.

Most farms use pasture-based grazing systems with medium to high levels of supplementary fodder, with more flexible and intensive feeding systems being introduced. South Australia’s average milk volume produced per cow is consistently the highest in Australia, particularly in the Limestone Coast region, where about 350 million litres are produced.

Around 40% of South Australia’s production is sold as fresh drinking milk, with the remainder manufactured into cheeses, powders, yoghurt, butter, oil and extended shelf-life milk. Many of these products are exported, mostly via interstate ports, to countries in Asia, the Middle East and Europe. Between one third and one half of South Australia’s milk is contracted to dairy processors with manufacturing bases in Victoria.

The majority of South Australian processing takes place using plants in and around Adelaide. Given the quickly rising global demand for liquid milk and powders, particularly in Asia, opportunities exist for new processing plants for these products. Asian demand for Australian liquid milk, including extended life products, has become very strong.

There are major opportunities for farmgate investment, particularly in cows and farms. These opportunities will increase South Australia’s processing capabilities and help to satisfy demand.

South Australia’s clean waters are home to some of the world’s most sought after seafood including rock lobster, southern bluefin tuna, oysters, prawns and abalone. The wild catch and aquaculture industries produced approximately 60,000 tonnes of seafood in 2013–14, generating revenue of $818 million.

South Australia is recognised worldwide for its robust and comprehensive policy and legislative frameworks, which ensure ecologically sustainable development in our fisheries and aquaculture sectors. Whether farmed through aquaculture production or commercially fished by one of the State’s 12 wild catch fisheries that are managed across 19 wild caught zones, South Australia enjoys a reputation for producing top quality, sustainable seafood.

South Australia’s seafood industry is crucial to many of the state’s coastal towns, with species such as rock lobster on the Limestone Coast and southern bluefin tuna on the Eyre Peninsula delivering significant economic returns and employment opportunities for regional communities. Port Lincoln is home to the largest commercial fishing fleet in the Southern Hemisphere. More than 2,300 South Australians are directly employed in the seafood sector, and another 1,085 are employed in associated activities.

Innovation and creativity, based on an exchange of skills and cooperation between industry, scientists and government have been a hallmark of South Australia’s successful seafood industry. With innovation from family companies, Australia’s tuna industry was revolutionised in Port Lincoln.

It has transitioned from catching tuna as a commodity for the cannery to the highly advanced tuna farming operations in place today that produce globally sought-after sashimi-grade tuna for export South Australian seafood is consumed across Australia and exported to the world, with international destinations ranging from Japan for tuna and China including Hong Kong for abalone and rock lobster.